The Big Reveal and an Escape!

A few weeks ago, I ordered a DNA kit from Wisdom Panel to learn about Louie’s breeding. He is obviously a mix (37.5%), but he has some tell-tale signs of the hound family and the hound group has the highest statistical likelihood of all the mixed-breed groups in his DNA, followed by the herding and terrier groups. He has a ruff of wiry hair around his neck and going into a  ridge down his back, so I had also assumed he had some type of terrier in his family history. I have spoken about his tendency to herd socks and toys, so it all makes sense. 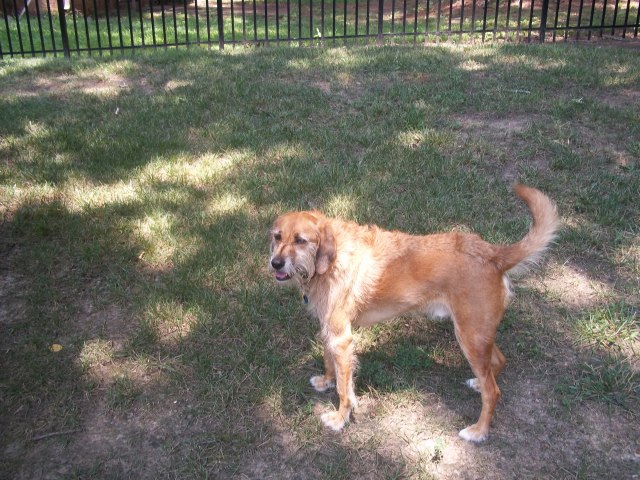 You can see the ruff of wiry fur around his neck and the smooth, soft fur on his flanks.

Of all the specific breeds identified in Louie’s DNA, American Foxhound at 12.5% is the only breed he comes close to resembling. Louie is not as large as an American Foxhound, but he has the long legs, sweet hound face and ears. Also coming in at 12.5% is Irish Setter and Pomeranian. I don’t really see either of those, except maybe his tail has a bit more of a plume than a hound. What really surprised me is he is 25% Keeshond or Wolfspitz! I learned Keeshonden have Pomeranian blood in their breed (along with Samoyed, Norwegian Elkhound, Chow and Finnish Spitz). The only influence I see from either Keeshond or Pom, is the ruff around his neck. 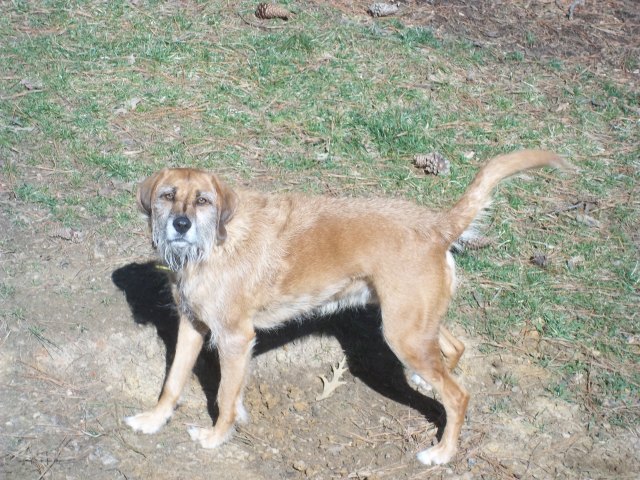 This snap also shows his ruff, smooth flanks and his beard!

Wisdom Panel also checks for the MDR1 (Multi-Drug Resistant) gene mutation that can cause a dog to have severe reactions to commonly prescribed drugs. Louie’s MDR1 gene was normal. I will send a copy of the Wisdom Panel report to Louie’s vets. It was really easy to get the samples from Louie. Wisdom Panel sends a kit with two long swabs that you use to swab the cheek for 15 seconds. The kit has a number that you register online and use the same box (with prepaid postage) to return the sample. Easy peasy! It took about 2 weeks to get the results. 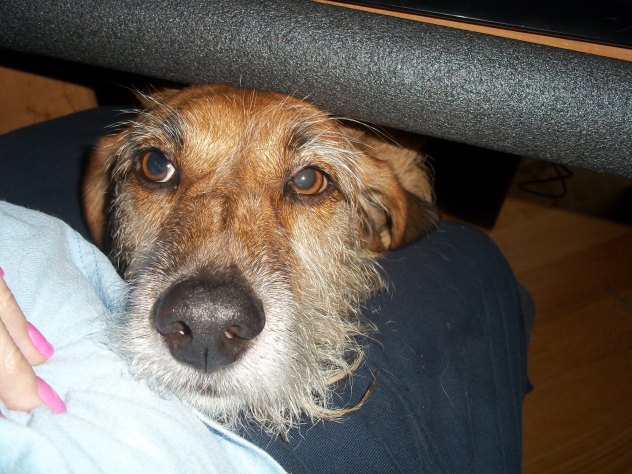 The above picture shows where he has been since I sat down to write the post. It started thundering and raining a little (not bad by any stretch) and he’s stood underneath my desk and panted hot, steamy dog breath on my legs. He won’t lie down, he just stands there and pants. It also shows a couple of my freshly manicured fingers which is the perfect segue into Mr. Louie’s great escape. I was leaving the house to go get the manicure, Louie was on the rug with one of his toys, but when I opened the door he bolted right through it. He’s never shown the slightest interest in bolting like that. I caught up with him at the neighbors’ house, I think he may have wanted to visit Kenzie. It scared me half out of my wits, so we need to be more careful with the front door here at Shoeful of Drool! I hope everyone and their fur babies are having a wonderful summer and managing to stay cool!

Only mad dogs and Englishmen go out in the noonday sun.” ~ Indian Proverb

I lived with a golden retriever/German shepherd mix named Dudley. Dudley was a rescue from Hurricane Floyd and he lived with me from October 1999 until he passed away in December 2012. In January 2001, Zoe a black & tan hound mix came to live with us until she died in June 2011. I truly believe having dogs has made me a better person. Every single day these dogs still give me something to laugh about and I hope by sharing these stories you can laugh, too.
View all posts by Shoeful of Drool →
This entry was posted in Uncategorized and tagged American Foxhound, Irish Setter, Keeshond, Pomeranian, Wisdom Panel. Bookmark the permalink.

2 Responses to The Big Reveal and an Escape!