It’s been a hot summer and it isn’t even officially one month old. The hot weather brings thunderstorms that pop up suddenly, so Louie has been giving the ol’ Thundershirt a workout. It isn’t a miracle cure for Louie’s fear of storms, but it does seem to calm him a bit (he doesn’t tremble quite as much as he does without it). Plus he looks stunning in it. 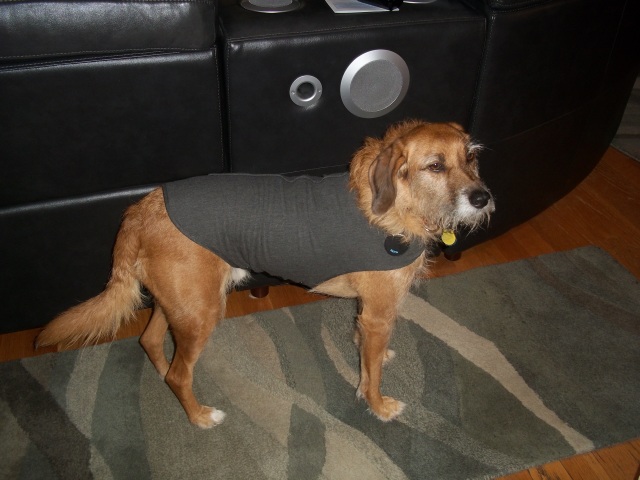 Mr. GQ in his Thundershirt

A couple of afternoons, he would start trembling and there was no storm nearby. I’d look at the weather map and there might be storms 75 miles away, but nothing local. One day, the map was absolutely clear for the entire central area of the state. I’d show him the doppler map, and he’d just keep trembling. I have no idea what sets him off, it’s not just the sound because there are times when there is no thunder. Over the 4th, it was clear he didn’t like the fireworks, but he didn’t turn into a quivering mass of butterscotch pudding the way he does during a storm. One night a thunderstorm opened up just as we went to bed and Louie was a wreck for about  30 minutes as the worst of it passed.  Then he settled in at the bottom of the bed even though we could still hear the thunder rolling in the distance. He’s an odd boy.

When I drop by Unleashed or some other place that carries good pet treats, I’ll pick up a bully stick or cow’s ear for him. He always takes these outside and reminds me with a low moan that I need to open the door now if I haven’t already! Those things always kept Dudley and Zoe occupied outside for a good 20 minutes or so. Not Louie, it wasn’t 5 minutes before he wanted to come into the house without his goodie. He buries it and lets it ferment for several days before he digs it up. I guess he’s not wild about the crunch. At least he takes them outside.

We have been walking every morning before the sun gets up over the trees. It is the only time of day fit for human or beast to be outside. Louie and I both were very happy to see our friend Ms. Harper Lee back in the blogosphere. We look forward to hearing from her and her new little sister Tallulah Bee. Tallulah-loo for now.

“Petting, scratching, and cuddling a dog could be as soothing to the mind and heart as deep meditation and almost as good for the soul as prayer.” ~ Dean Koontz, False Memory

I lived with a golden retriever/German shepherd mix named Dudley. Dudley was a rescue from Hurricane Floyd and he lived with me from October 1999 until he passed away in December 2012. In January 2001, Zoe a black & tan hound mix came to live with us until she died in June 2011. I truly believe having dogs has made me a better person. Every single day these dogs still give me something to laugh about and I hope by sharing these stories you can laugh, too.
View all posts by Shoeful of Drool →
This entry was posted in Uncategorized and tagged dog, K9 Harper Lee, Thundershirt, thunderstorm, Unleashed. Bookmark the permalink.

4 Responses to My Odd Dog