Sweet Pea visited the week of Labor Day while her human mom went to the mountains. Like Lillie, she knows her humans will return for her so she makes herself at home here at Shoeful of Drool. Between the two of us, we managed to knock over a glass of wine on the deck. She’s the 17 lb. bull in a china shop, but no worries, I do have a wine sippy cup that I used for the rest of the evening. 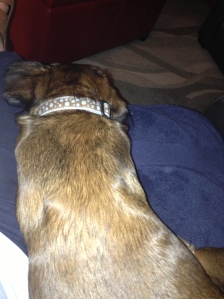 Snoozing after a spell with reverse hiccups!

She reminded me that Rosh Hashanah began that Wednesday; I’m not sure if she was verklempt a la Linda Richmond or if she was channeling her inner Billy Crystal, but she coughed and hacked and gagged for two or three minutes. I was starting to worry a little, but she jumped up on the couch and settled into a nice little snoozy and was fine. Either she swallowed something or more likely, she had a case of the reverse hiccups (some call it reverse sneezing). This is a short video of a chihuahua with a case of the reverse hiccups. Dudley would get them more frequently than Zoe, and it always sounded bad, but he was always fine afterward. A belated”Shanah Tovah” and wishes for a Sweet New Year to all of our Jewish friends! 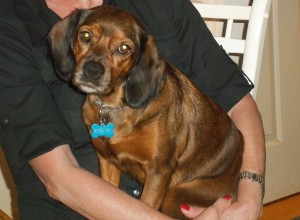 That face says it all!

We had a little excitement on our morning walk when nieghbor dog Fasa was running loose and decided he needed to check out the new girl in town. Sweet Pea is good with other dogs, but Fasa is so much bigger, I worried he would crush her. Before I could scoop her up, she had squirmed out of her collar and piddled a little bit. I managed to get her into the house none the worse for wear, but I bought her a Lupine harness that afternoon to keep here for when she visits. Cars on the street where I live drive entirely too fast and I don’t want her getting loose again. 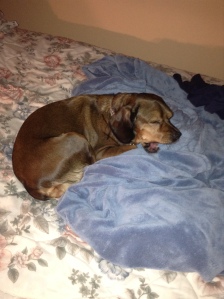 Hunkering down for a snooze!

We had a bunch of fun and I started calling her the “Brindle Blob” because that’s what she looked like curled up on my bed, or on the towel on the couch. She is a “piddler” meaning she pees a little bit when she’s excited or scared. I learned not to look at her when I came home from work because if I do, she piddles. I come into the house and walk straight to the sliding glass doors to get her on the deck that way if she piddles, she does it on the deck. Although, by then she’s gotten over the initial excitement and usually makes it to the yard without an accident. 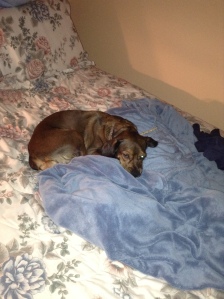 I’ve said it before, I like big mutts (and I cannot lie), but Sweet Pea sure makes the case for smaller dogs. I love her mobility, you can take her anywhere. An added bonus is the ability to give her a bath in the kitchen sink. Bathing Dudley and Zoe, whether in the tub or the backyard, was an absolute chore! It’s not quite time for me to go find a dog to adopt me. I used to think I knew exactly what type of dog I’d get, a fairly large black dog. Now, I’m not so sure, it’ll be interesting to see who I bring home.

I lived with a golden retriever/German shepherd mix named Dudley. Dudley was a rescue from Hurricane Floyd and he lived with me from October 1999 until he passed away in December 2012. In January 2001, Zoe a black & tan hound mix came to live with us until she died in June 2011. I truly believe having dogs has made me a better person. Every single day these dogs still give me something to laugh about and I hope by sharing these stories you can laugh, too.
View all posts by Shoeful of Drool →
This entry was posted in Uncategorized and tagged Billy Crystal, Linda Richmond Coffee Talk, Lupine harness, reverse hiccup, reverse sneezing, Sweet Pea. Bookmark the permalink.