I love reading “fun facts” about most anything, so when I found 99 Fun Facts about Dogs I immediately started looking to see what applied to Dudley and Zoe. The first thing I saw was that dogs with pointed faces who resemble wolves tend to live longer than dogs like bull dogs and pugs who have flat faces. The world’s oldest dog was Bluey, an Australian cattle dog who lived for 29 years and 5 months (Dudley would only be middle aged now if he lives that long). There are about 400 million dogs in the world. Dogs have lived with humans for 14,000 years whereas cats have only adopted humans in the past 7,000 years. The world’s largest dog was Zorba, an English mastiff who weighed 343 lbs and was over 8′ long from nose to tail. Although it did nothing to improve  relations between the Soviet Union and U.S., Pushnika the daughter of Laika, the Russian dog who died in space, had four puppies with JFK’s dog, Charlie.

Male dogs raise their legs to aim higher when they urinate on a tree or post to leave a message that they are tall and intimidating. when he was younger, Dudley would nearly topple over he hoisted his leg so high. He never raised his leg that high when he tinkled in the backyard, but get him out in the neighborhood on a leash, he thought he was Brayshnikov! Now, he lunges more than he raises his leg, but he will still sometimes balance precariously on 3 legs on our daily walk. I’d hate to be the person who enforces Ventura County  California’s law that dogs and cats must have a permit in order to have sex. One factoid that I found very interesting was a dog can barely see a human standing still 300 yards away, but they can see their owner a mile away if their owner is waving their arms. 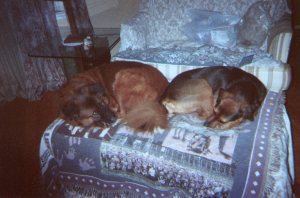 A pack of dogs need only consist of two dogs as Dudley and Zoe exemplified on many occasions. I remember once they both had gotten out of the fence and were merrily running through the neighborhood. By then I had learned that the easiest way to corral a couple of dogs running loose was to get the car and open the door and they would jump in. And I would drive them home secure in the knowledge that I was the alpha dog in the pack, or at least they let me think so.

With the holidays right around the corner, please be sure to keep poinsettias where your dog(s) cannot reach them. They are poisonous to dogs and we want everyone to have a happy and safe holiday!

A dog has the soul of a philosopher. ~ Plato

I lived with a golden retriever/German shepherd mix named Dudley. Dudley was a rescue from Hurricane Floyd and he lived with me from October 1999 until he passed away in December 2012. In January 2001, Zoe a black & tan hound mix came to live with us until she died in June 2011. I truly believe having dogs has made me a better person. Every single day these dogs still give me something to laugh about and I hope by sharing these stories you can laugh, too.
View all posts by Shoeful of Drool →
This entry was posted in Uncategorized and tagged animals, canine, dogs, Dudley, fun facts, Humor, senior dogs. Bookmark the permalink.