Last Tuesday was the 13th anniversary of when Dudley came to live with me. I’ve mentioned before that he was a rescue from Hurricane Floyd. The vet told me he was between 12 and 18 months when I got him. He had all of his adult teeth, but he still had quite a bit of puppy in him so I have always figured he was closer to a year old when we met. Dudley was skittish of me at first but once he got to the house he seemed to relax a bit. He did go a little nuts when he saw his reflection in the fireplace screen and later when I went to pick up a pizza, he pulled down the drapes over the living room windows. I cut him some slack, because they weren’t hung all that securely to begin with.

It took awhile before Dudley realized his reflection wasn’t another dog. 1999

At first, I thought I’d get him a can of sardines to celebrate because he loves them. I think they are gross and they remind me of right before Zoe died (I used them to bribe her to eat), so I nixed that idea. Then I got the idea to run up to the Harris Teeter and get an Alaskan salmon filet for both of us. I’m not wild about any type of fish, but I try to eat it regularly and always share it with Dudley when I do. But there was a traffic jam in Leesville, so I turned around first chance I got and went back to the house to call and order a pizza. It worked out well, when I went to pick it up at the Kroger shopping center, it was sprinkling rain and there was a double rainbow right over the Kroger. I haven’t seen one of those in a long while, so I took it as a good omen for good things to come. 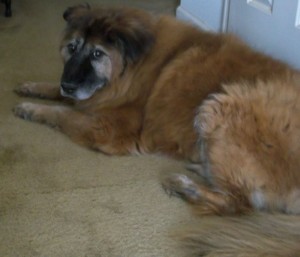 Friday morning we headed out early for our walk and as soon as we got to the end of the driveway, I saw where one of my neighbors Gary, was coming around the corner with his dog, Wendy.  Dudley hadn’t noticed and I took him into the neighbor’s yard next door. When he was young, he’d try to fight with other dogs and he was really hard to handle around other dogs, so I try to keep our distance. Plus, I don’t want him to re-injure his knee, or hurt himself jumping around. He is a bit more socialized now that he’s older, but Wendy is considerably smaller than Dudley and I thought it best they don’t get too close. Dudley was fine, sniffing all the good smells of MacKenzie and Bourbon, the dogs next door; I was talking to Gary as they walked past when all of the sudden, the neighbors’ cat, Molly jumped out of the bushes and scared all of us about half to death. Needless to say, Dudley’s leash became a live wire with him jumping around and I think he was rather pleased at himself when Molly ran off behind the house. He chuffed and peed on the tree and we continued on our walk.

I leave you with one piece of advice, don’t ever bury your face in your dog’s fur when you have Vaseline on your lips, you’ll end up with a mustache. It’s been a wonderful 13 years!

If dogs could talk, it would take a lot of the fun out of owning one.  ~Andy Rooney

I lived with a golden retriever/German shepherd mix named Dudley. Dudley was a rescue from Hurricane Floyd and he lived with me from October 1999 until he passed away in December 2012. In January 2001, Zoe a black & tan hound mix came to live with us until she died in June 2011. I truly believe having dogs has made me a better person. Every single day these dogs still give me something to laugh about and I hope by sharing these stories you can laugh, too.
View all posts by Shoeful of Drool →
This entry was posted in Uncategorized and tagged animals, canine, canine communication, dogs, Dudley, senior dogs, walking. Bookmark the permalink.