Posted on September 2, 2012 by Shoeful of Drool

Even though it was only about 80 degrees, the air here in Kackalacky is about as thick as molasses in January. I really wasn’t looking forward to our walk this morning because I would be inhaling pure steam, but off we went about 10:30. Right up to the end, it was a rather uneventful walk, although I was happy to see Dudley’s tail wagging high. I was absolutely delighted when Dudley decided to forgo one of the longer cul-de-sacs we sometimes walk down and we got home after about 25 minutes. Lately, I have been letting go of Dudley’s leash once we get in the yard to walk over to toss the bag of poop (we have pooper scooper laws) into the trash. I doubt ten seconds pass before I usually have the leash back in my hand. Note I said “usually.” 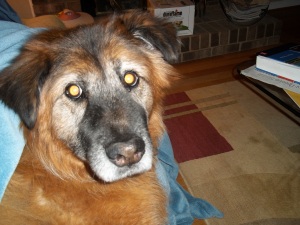 It has crossed my mind that he could dash into the road chasing something, but with his bum knee, age and the fact he rarely even looks at squirrels or rabbits anymore, I figured the risk was minimal. He normally just walks over to the steps leading to the front porch and waits patiently. I was bending over to grab his leash and start up the steps when a cat darted out of the bushes. Forest Gimp morphed into Jesse Owens and across the street they went. A grateful thanks to the person in the SUV that stopped so I could cross the street at a slow trot trying to catch my little runaway. I think the cat went up a tree because I never saw it again. Dudley stopped long enough to let me think I’d get him without too much trouble before he jetted off to the next backyard. I finally did  grab hold of his leash and we made it home without further incident.

It was great to see Dudley can still run if he wants and he really seemed pleased with himself. Usually when he sees a cat he gets a little nervous, but I think seeing the cat running ignited his instinct to chase. I have to admit, my little jog put the snap back in my garter for the day. Even though it was fun, from here on out, Dudley will be walking over to the trash can with me. I leave you with a very bad joke:

Q: How do you catch a runaway dog?
A: Hide behind a tree and make a noise like a bone!

I lived with a golden retriever/German shepherd mix named Dudley. Dudley was a rescue from Hurricane Floyd and he lived with me from October 1999 until he passed away in December 2012. In January 2001, Zoe a black & tan hound mix came to live with us until she died in June 2011. I truly believe having dogs has made me a better person. Every single day these dogs still give me something to laugh about and I hope by sharing these stories you can laugh, too.
View all posts by Shoeful of Drool →
This entry was posted in Uncategorized and tagged canine, cats, dogs, pooper scoop laws, runaway. Bookmark the permalink.

1 Response to My Little Runaway