Posted on September 1, 2012 by Shoeful of Drool

When I started this blog, I promised myself I wouldn’t write about the bathroom habits of my dogs. Even as I made that promise, I knew I would break it, I just didn’t know what would prompt me to break it. Both of my dogs came to me house trained and rarely had accidents in the house. The few accidents they did have can be attributed to medication they were taking or a medical procedure they had just had. In the year or two before she died, Zoe would sometimes have a little turd slip out while she slept. It wasn’t a big deal and easy to clean up. I quit buying expensive comforters years ago and kept a sheet over the comforter on the bed that I would just toss in the wash whenever Zoe left her little “gift”.

This has happened to Dudley a couple of times in the past month, a little turd coming out while he sleeps, but he has also had a couple of episodes where he was awake and it was a full fledged BM. The other day he had gone out into the backyard while I was putzing around in the bedroom and when Dudley came back into the house, he left a trail of about 5 or 6 piles in his wake. I came out of the bedroom and started cleaning it up and Dudley just looked at me and hung his head. He was so pitiful, I had to go over and hug and pet him before I finished getting everything clean. It was firm and easy to clean up and I squirted some Nature’s Miracle on the spots and then called the vet. 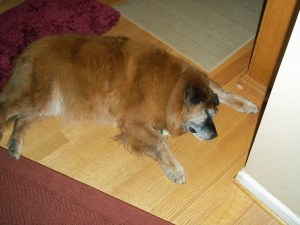 The next morning we went to see Dr. Szabo at Hidden Valley Animal Hospital. I explained what had happened and Dr. Szabo asked me if I thought the stool was just “falling” out of him. That was exactly what it seemed to be as there were piles every couple feet like it came out while Dudley was walking. On our walks, Dudley does a good job of holding the position while he does his business, but I bet he never even tried to get into position when it happened in the house. Dr. Szabo believes that Dudley has some arthritis in his spine and that the resulting inflammation sometimes blocks the nerve that signals Dudley he has to poop. Dudley currently takes Tramadol for arthritis pain and Dr. Szabo added Rimadyl to that regimen because of its anti-inflammatory properties that Tramadol does not have.

So far, so good. Dudley seems to be tolerating the Rimadyl and there have been no more accidents. It is a sad reminder that my handsome sweet boy is 14 and approaching the end of his life much more rapidly that I want. As long as he eats and is excited to go for a walk, I will do whatever it takes to keep him comfortable and free of pain as possible.

Such a handsome, brash boy!

On a happier note, this morning as I was cleaning up Dudley’s “landmines” in the backyard so I could mow, Dudley came running down to the fence to bark at a neighbor dog. It was as close to a run as I’ve seen since he blew out his knee and made me realize that I have to stop thinking about the end and just enjoy what time I have left with him.

Congratulations to Nancy Dill who won the $25 gift card for commenting on this blog. Stay tuned for future drawings to enter.

Dogs’ lives are too short.  Their only fault, really.  ~Agnes Sligh Turnbull

I lived with a golden retriever/German shepherd mix named Dudley. Dudley was a rescue from Hurricane Floyd and he lived with me from October 1999 until he passed away in December 2012. In January 2001, Zoe a black & tan hound mix came to live with us until she died in June 2011. I truly believe having dogs has made me a better person. Every single day these dogs still give me something to laugh about and I hope by sharing these stories you can laugh, too.
View all posts by Shoeful of Drool →
This entry was posted in Uncategorized and tagged canine, canine arthritis, canine incontinence, dogs, Dr. Szabo, Dudley, fecal incontinence, Hidden Valley Animal Hospital, Nature's Miracle, poop, Rimadyl, Tramadol. Bookmark the permalink.